PVC vs. CPVC: Which Is Superior? 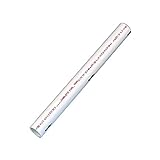 We are a participant in the Amazon Services LLC Associates Program, an affiliate advertising program designed to provide a means for us to earn fees by linking to Amazon.com and affiliated sites.

From Legos and eyeglass lenses to shampoo bottles and bullet-proof vests, thermoplastics are everywhere. Due to being a more cost-effective, noncorrosive option, chances are good that thermoplastics in the form of PVC and CPVC are what make up the pipes in your home or office building. So, which is better, PVC vs CPVC? The answer lies in that extra C, of course.

Before we get into the differences between PVC vs CPVC, we should better define thermoplastics in general. Thermoplastic material is a plastic made of polymer resin. As the name suggests, it is temperature sensitive, becoming soft and pliable when heated above a certain temperature. Below that threshold, it becomes hard and smooth, making it ideal for many types of situations.

Now that we have a better understanding of thermoplastics, we can begin to see the differences between PVC vs CPVC a little more clearly. 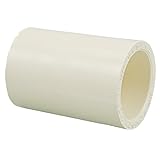 The acronym PVC stands for “polyvinyl chloride.” It is a thermoplastic material comprised of 57% chlorine and 43% carbon. The chlorine is derived from industrial grade salt, while the carbon in PVC comes from oil or gas ethylene. PVC was first developed in 1925, when Dr. Waldo Semon, working for BF Goodrich, was looking for a way to bond metal to rubber. He instead stumbled upon a strong yet flexible material with great shock absorbing qualities, leading to the creation of the tire company’s extremely durable PVC tire treads.

It was not until the 1950s that the PVC pipe we are familiar with today was invented. Nearly indestructible, PVC pipe was found never to rust or rot away. This made it perfect for the use in irrigation systems, and it would go on to completely replace the use of the copper and metal pipes of old. PVC is very flexible, as well, which has made it crucial to the construction of buildings in areas which are prone to earthquakes. And, because of its smooth, impermeable surface, PVC is resistant to bacteria. Water companies have now come to rely on PVC piping in order to stave off contamination.

How PVC Is Used

PVC is used in quite a large array of applications, not just for plumbing. It is used in medical machinery due to its natural antibacterial properties. Its durability and flexibility make it perfect for the molding parts for car stereos and other equipment. Cables insulated with PVC pipe are protected from the elements and from critters chewing through the lines. Also, some houses have PVC siding to keeping the home safe and dry.

Of course, PVC piping is probably most recognizable as a plumbing tool. PVC is virtually indestructible, breaking only about 1% of the rate at which metal breaks. It does not corrode like metal does, and the slick, impermeable surface stays free of bacterial contamination, which makes PVC ideal of the plumbing of any home. This means you won’t have to deal with any more rusty, brown water once those copper pipes are replaced. PVC pipes are also less likely to hold on to material and get clogged, providing a boost in functionality and adding an increase to energy efficiency.

Did we mention how inexpensive it is? PVC pipe can be purchased for as little as $2 per foot. Copper pipe costs nearly three times that amount, if not more, making PVC not only better for use in plumbing systems, but incredibly economical.

With everything we have learned so far, PVC seems like a miracle material. What sort of limitations could there possibly be?

Remember, PVC is a thermoplastic. What does that mean? It is temperature sensitive. PVC pipes are rated to hold their shape and pressure at temperatures below 140 degrees Fahrenheit. This is a big problem for those who like hot showers in the morning. Most hot water heaters are generally set around 140 degrees, and industrial boilers go even higher. In these situations, having a different solution is absolutely necessary to keep the water flowing.

This is where that extra C in CPVC comes into play.

How Is CPVC Different?

CPVC was first created by BF Goodrich by chlorinating PVC. This process involves bombarding it with UV radiation, which allows the hydrogen molecules to be displaced by chlorine ions, increasing the chlorine content of the material a good bit. The end result, chlorinated polyvinyl chloride, or CPVC, is tough and durable material which looks so much like PVC that it has to be marked in a different color, usually yellow or dark gray, in order to tell them apart. The material was taken up by Genova Products in the early 1960s to create piping and fittings that would hold up to temperatures nearly 90 degrees Fahrenheit higher than the original PVC material.

How CPVC Is Used

CPVC has the same non-corrosive, non-toxic properties that PVC does, and it can be used in nearly all the same applications, but it is generally used for piping hot water around the home or in large buildings.

CPVC is generally tested to be stronger and more leak-resistant than PVC, and it can withstand higher pressures, as well. The higher temperature threshold makes it more fire resistant, making it the better option for fire suppression systems, as it takes higher temperatures for CPVC to melt.

There are three significant drawbacks to CPVC.

Cost – CPVC takes more time and resources to manufacture. This drives the price up for this material over PVC, although both options are much less expensive to the standard metal pipes of the pre-1980s world.

Fragility – The chlorination process makes CPVC a harder material than PVC, but it can also make it brittle. Pipes and fittings have been known to crack or break if the material is dropped. Shifts in the foundation, either by natural erosion or by more extreme shaking from earthquakes, can cause warping or breaks in the piping as well.

And then there is the other end of the temperature scale to consider. PVC and CPVC can become brittle from freezing temperatures, but because of the chlorination process, CPVC becomes brittle at higher temperatures. Burst pipes are never fun and can become a major concern for any household.

The Taste – More people report a plastic taste when CPVC pipe is used for their drinking water. The chlorination process allows for the efficient movement of hot water, but the price is learning to live with a slight after taste which, while nontoxic, is just unpalatable for some.

PVC vs CPVC: Which Is Superior?

The PVC vs CPVC question will continue for generations to come. Some say that because of its higher temperature thresholds, all PVC applications should be automatically given over to CPVC pipe instead. There are issues with this, however, not the least of which is price. For everything that PVC is used for, the world would be a much more expensive place to live if we switched everything out for CPVC instead. PVC vs CPVC is enough to leave you scratching your head.

The other drawback to CPVC that we cannot ignore is the tendency to warp or crack. The chlorination process does wonders for this material’s ability to handle higher pressures, but we would not want more in our building than there absolutely needs to be. Should there ever be an earthquake, or even if a flood soaks the ground well enough to cause slight shifts in the foundation, fixing warped and broken pipes are not something that anyone will want to have to deal with, especially when we know for sure that PVC is more pliable and less likely to crack under similar conditions.

The taste of water running through a CPVC pipe is another big issue for us. There is enough trouble trying to get water from the city that does not taste like it is being piped from a swimming pool. No one wants to add to that problem.

This question is completely dependent on the applications you are using the material for. PVC vs CPVC is a debate you may want to have with your contractor. For most applications, PVC is fine. If you need some conduit to run wire, the PVC should be your go-to material. If you are building an irrigation system for your lawn or garden, then PVC is definitely the way to go, especially given its flexibility and durability.However, if you are building a sprinkler system for fire safety reasons, then the higher temperatures of CPVC is what you are looking for. This holds true for water heaters as well. Anything that will be coming into contact with temperatures above 140 degrees Fahrenheit and below 200 degrees Fahrenheit should definitely use CPVC over PVC. The PVC pipe will lose pressure, and it may even begin to melt if the temperatures get too high, and then you will have a much, much bigger issue on your hands.

In the end, we have to say that the PVC is the winner of the PVC vs CPVC superiority debate. CPVC should only be used when conditions call for it and when higher temperatures are going to be an issue. CPVC is good, but PVC is slightly more versatile, slightly more flexible, and slightly more durable over all.

As a participant in the Amazon Services LLC Associates Program, this site may earn from qualifying purchases. We may also earn commissions on purchases from other retail websites.